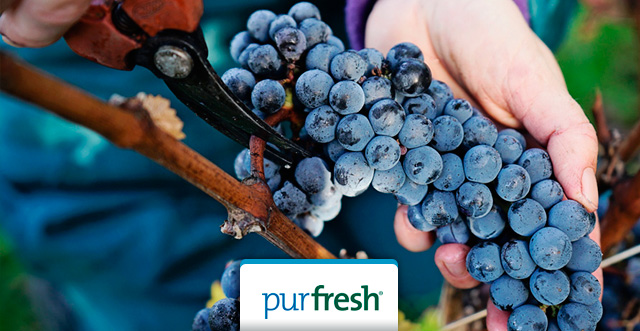 Table grapes are intended for consumption while they're still fresh. They are different from grapes grown for wine consumption, juice production, or for drying into raisins.

There are many varieties of table grapes. They come with and without seeds and also exist in many colors, sizes, sweetness, and adaptability to local growing conditions.

Varieties such as Thompson Seedless and Flame Seedless are preferred by growers because they are resistant to the damage that happens during shipment, and this reduces loss.

There are other varieties less common such as Cotton Candy, Kyoho, or Pione, but these are customized to meet specific size, appearance, and flavor characteristics.

Currently, table grape's production is experiencing difficulties caused by the coronavirus pandemic, which has affected the agricultural industry in general.

The USDA's Foreign Agricultural Service about the global production of fresh table grapes is estimated to reach 23.4 million tons, which is 900,000 tons more than the previous year.

The United States is the largest importer of table grapes, and its production is forecast to drop to 906,000 tons. Right now, they've switched from Mexican grapes to those produced in California.

The demand of this fruit remains stable despite the coronavirus crisis and retailers in The US managed to market large volumes to meet the demand.

Nevertheless, in some places, harvesting was delayed for two weeks due to freezing temperatures.

Meanwhile, the world's largest table grape exporter right now is Chile, even though they experience the consequences of an 11-year drought, their production remains steady. They have increased their exports to countries like China by 93% since 2015.

In other South American countries like Peru, the production has increased to 648,00 tons and their harvest season is set to start next month. Lately, the executive director of Provid in Peru declared that the country is seeking new exportation markets because production increased 26% the last four seasons.

Provid is about to complete the processes to add Japan to the list of destination countries for table grape’s production, for this they tested a new technology called cold treatment, a requirement to export so far from Peru. Just in the last 6 months, Peru grape exports were up 26.5% accounting for US$451 million.

At the other side of the world, Russia's production will remain steady at 21,000 tons and it is expected they will import 275,000 tons. While in South Africa, they are experiencing increases in its production, 320,000 tons of table grapes were planted. This is because of their favorable weather conditions.

The largest producer and consumer of fresh table grapes in the world as for today is China. Its production for 2019/20 is set to reach 10.8 million tons and it is estimated that about 708,000 hectares is the planting area for Chinese table grapes.Most exports from this Asian country are directed to other South and Southeast Asian regions. But when China is offseason, they import their grapes mainly from Chile, Peru, Australia, and South Africa.

EU production is expected to drop 14% to 1.4 million tons due to damaging rains during flowering in Italy. Exports are expected to remain flat at 75,000 tons. Despite lower supplies, imports are estimated to shrink slightly to 675,000 tons as reduced shipments from India, Peru, and Brazil more than offset gains from Egypt and Turkey. Reduced output is anticipated to drive consumption to its lowest level since 2001/02.

Germany will start imports from Spain and Italy. Traders from this country prefer Spanish and Italian over Egyptians because they are larger.

The truth is that the world loves grapes and even though this year has come with some difficulties, the demand of this delicious fruit won’t decrease. This commodity’s world market benefits largely from refrigerating technology, as well as other resources such as ozone atmospheres in shipping containers that help extend the shelf life of the grapes so that they can endure transport from country to country.

If you want to know more about Ozone Atmosphere for Shipping Containers and Grapes Commodity visit purfresh.com.